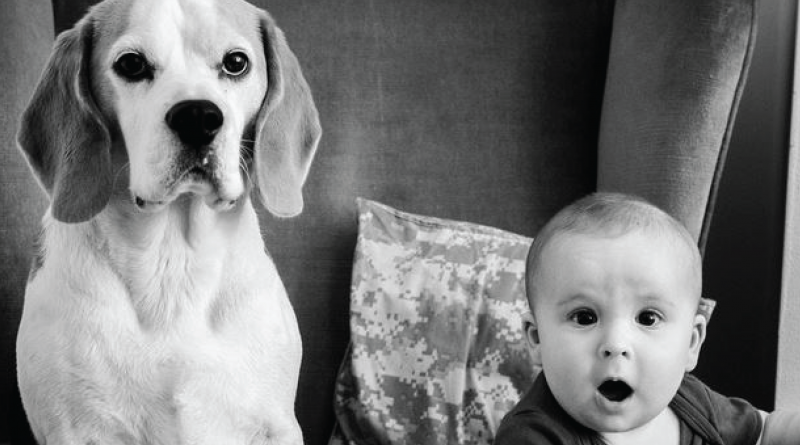 This father took a series of pictures every month of his newborn son, Stanley and their faithful beagle Jasper sitting on the same armchair for the last 3

years. Jasper at the time was 5 years old.

There’s nothing like growing up with your best friend. Enjoy the photos of Jasper and Stanley as they grow old, month by month…and as you begin to see the aging of an older dog and the baby becoming the grown up toddler.

Stanley is still a cute and fresh baby in his first-month picture with Jasper. He could hardly do, see, or grasp anything then. You can also tell Jasper is getting accustomed to having a baby around and looks excited in this photo. This moment was the beginning of a series of friendship photos on the same chair.

Stanley just began the second half of his first year, and the growth milestone is fantastic. He has grown into a healthy and robust baby, but you can still see the innocence in his eyes. They both seem quite happy evident by his adorable smile and chubby cheeks enough to brighten up your day.

Stanley can finally seat correctly without any support. He appears more active and looks like he wants to crawl. The change is remarkable in just seven months in comparison to Jasper, who seems not a day older from the first month. Still, they do make a lovely and cute pair.

The transformation from a baby to a toddler is authentic and unbelievable. Staley’s one-year growth and development have been extremely rapid. Jasper still maintains his posture though he looks a bit older here. The moment demonstrates just how much things can change yet remain fresh in only twelve months.

The development milestone is healthy and amazing. Stanley appears more confident, and the smile on his face depicts a bubby and charming angel. He is at the age where toddlers are developing independence both physically and emotionally. At nineteen months, he can relate better and play with his best friend, Jasper.

Two years down the line and Stanley is all grown up into a bouncing boy. He seems highly active and still has a charming smile. On the other hand, Jasper’s looks have not changed a bit. Their two years of friendship show they have truly bonded and still look perfect together.

It seems their bond has grown more in-depth, and now they have similar facial expressions. These two were meant to be buddies, and fortunately, every moment gets recorded. Stanley’s twenty-fifth month shows incredible physical changes, such as an increase in height. You can tell the difference since he is almost the same height as Jasper.

This picture depicts a moment full of love and care. Both Stanley and Jasper appear cheered up for their twenty-sixth-month photo. Stanley brought his toy with him since he is at the stage where he wants to experience everything through touch. The one-month growth transformation from February is also notable.

Stanley has a charming smile that brings life to this picture. He still looks as fresh and cute as before, but you can tell he has come a long way. You can see the progress from the past till his two year and four months age. The friends are dedicated to capturing their moments.

This photograph does show how much a toddler can grow in a matter of months. Stanley appears more mature but is just as bubbly as before, and Jasper maintains his same old posture. However, you can notice a slight difference in Jasper’s body, which shows that it is changing its own.

You can tell how big Stanley has grown by the reduced space in the chair. They both fit perfectly in the chair and look incredibly cute in this photo. You can tell they are both relaxed and happier. Additionally, Stanley shows excellent signs of independence, which is a significant development milestone

Stanley finally did reach Japer’s height while seated. He seems excited, and Jasper does look amazed. This moment depicts a growth milestone worth noting. Stanley has changed quite much from the baby who needed back support to take these pictures. On his second half of two years, he looks more playful and jolly as usual.

This picture seems like a quite calm moment for the best friends. Stanley has already developed thinking, and he is undergoing the learning stage. This moment captures not only a friendship but also a vital step in Stanley’s development. Still, it is great to see both of them calm and looking innocent.

Of all the previous photos, this is quite a unique one. It is the first picture in which Jasper has a posture change. It kind of looks like they did a similar pose in this photo. Stanley is still donning his fantastic smile and looks all grown up in this photo.

A beautiful way to capture the moment of these day one buddies. It is a real depiction of genuine emotions filled with happiness and love. Stanley has grown up, but his adorable smile remains the same. He looks quite healthy as he approaches his third birthday and year of friendship.

It is the first time we get a glimpse of Stanley’s full smile and teeth. His physical growth is evident, and it is impressive. He is totty photogenic and seems more lively and excited to have their picture taken. They look delightful together in this photo despite Jasper looking away.

On his third year, Stanley dons a Christmas t-shirt, a smile of his face and poses with this best pal. This time around, he cuddles Jasper showing how deep their friendship bond has evolved. It is an adorable and emotional moment seeing them together from the start to date.

Years and months have passed, but these two seem unbreakable. Stanley has come a long way from being a baby until his third year. He certainly looks older but has maintained his charming looks and smile. Jasper has undergone minimal changes over the years, and his love for Stanley is still the same.