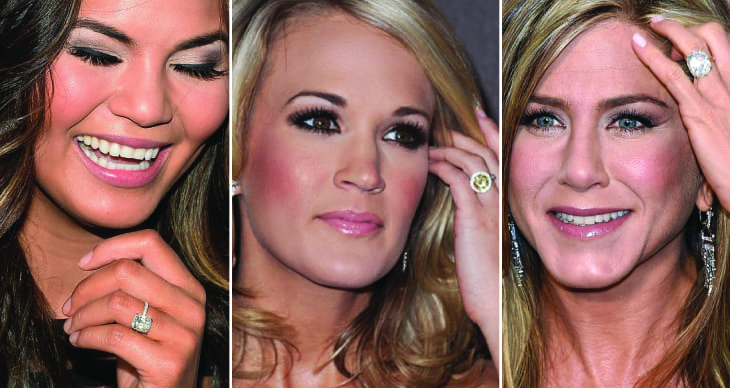 Engagement rings are much more than mere jewelry items for us. Over the years, these have become a status symbol, and the more precious solitaire it is, the more attention it garners. Let’s not forget, in a highly intertwined and globalized world, celebrities have to do everything to steal the limelight, and flaunting an expensive engagement ring is one of the best and proven ways to achieve that.  Some of this hype could be credited to us, the consumers, and fans. We are obsessed with celebrity engagement rings. We love to bear witness to fairytale-like lavish weddings. This is why celebrities try their best to get their hands on the most expensive and innovative rocks of all time.

Today, we will take you on a journey down memory lane when our favorite celebs rocked their super-expensive engagement rings. You may be surprised to find some celebs featured twice or even more. That’s because they got engaged more than once and were lucky enough to flaunt the most precious and priciest gems on their fingers. Perhaps, in Hollywood, a happily-ever-after is never guaranteed. But fairytale engagements and extravagant rings definitely are common.

The super-talented Elizabeth Taylor needs no introduction. Whenever her name sprouts, we are reminded of her impressive jewelry collection. Taylor married a remarkable eight times and twice to the same person. So, there’s little doubt that she led an eventful life. But, we are more interested in exploring her passion for sparkling diamonds. Over the years, Taylor added unimaginably precious gems and signature pieces, but the most appealing of them all is her engagement rings. She was lucky to get some of the most stunning engagement rings, which keep fascinating people to this day. Taylor truly believed that diamonds are a girl’s best friend as both are timelessly exquisite. When Taylor met Sir Richard Burton on the set of Cleopatra in 1968, both instantly got attracted to each other. Burton decided to propose to her with a platinum-set Bulgari pendant. The pendant featured an 18.61-carat emerald encrusted in diamonds all around.

An interesting fact about this pendant was that it could be detached and worn as a brooch. He chose to propose with a Bulgari ring as per Burton because “the only Italian word Elizabeth knows is Bulgari.” Five years later, when both were married, Burton gifted her the world’s most renowned diamond, an incredible 33.19 carats Krupp Asscher cut, which was later renamed as Elizabeth Taylor diamond worth $11.4 million at the time. Reportedly, Taylor loved this diamond so much that she used to wear it daily.