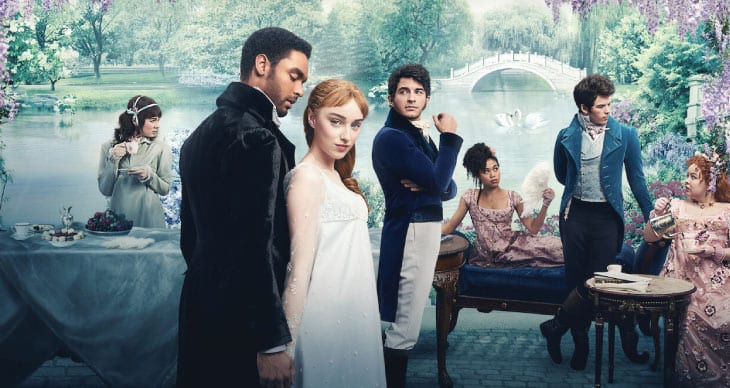 The show’s creator Chris Van Dusen wanted this period drama to be as close to modern society as possible in order to capture the interest of the masses. Not everyone would be interested in watching a period drama, so it was deemed a good idea to take some creative liberties. It is true that a majority of period dramas are made after taking cues from cultural experts, who remain a part of the production team until the project is complete. Their task is to monitor historical accuracies and ensure the project’s authenticity. However, Bridgerton’s producers and director employed a novel approach as they opted to show a more modern and diverse re imagining of London’s Regency-era high society. Julia Quinn admitted that the show’s historical authenticity was compromised to make it suitable for a modern audience while speaking with Entertainment Weekly in Dec 2020.

“It’s important to remember that ‘Bridgerton’ isn’t a history lesson. The show is for a modern audience.

In another interview with Town and Country magazine, Shonda Rhimes, the show’s creator and long-time collaborator for Van Dusen shared a similar opinion. “We knew we wanted the show to reflect the world we live in today, and even though it’s set in the 19th century, we still wanted modern audiences to relate to it and to see themselves on screen,” Rhimes said in a confirming tone.

Julia Quinn, the author of the book series Bridgerton, from which the show has been adapted, remained a

key part of the team throughout the production process. She stayed involved with the reimagining of her stories by serving as a consultant. Quinn also fully supported the show’s producers Van Dusen and Rhimes, when they decided to take creative liberties with her novels’ content. In Dec 2020, while giving an interview to Oprah magazine, Quinn stated that she didn’t want to interfere in the production process much as she had no idea how content should be adapted for TV.

“I was not going to tell Shonda Rhimes how to make television.It’s not a word for word adaptation, and it shouldn’t be. I never expected that. I didn’t want that. It’s not what television should be about,” Quinn noted.

Bridgerton has been noted for its sheer diversity and mass appeal, but still, it has faced its fair share of criticism, especially when it comes to the decades-old debate on race and privilege. In the show, Queen Charlotte, played by Golda Rosheuvel, spearheads an active hunt for Lady Whistledown. However, as per historical accounts, Queen Charlotte was England’s first monarch of mixed race. According to Van Dusen, this queen was a fascinating character for him and resonated with him. While speaking with Entertainment Tonight in Dec 2020, Van Dusen said:

“That’s something that really resonated with me. I started to wonder what that could have looked like. What could this queen have done? Could she have used her power to elevate other people of color in society?”

Nicola Coughlan’s claim to fame is the hit Channel 4 drama Derry Girls, while he plays Penelope Feathrington on Netflix’s Bridgerton. In an interview with The Guardian in Dec 2020, Coughlan said that she scrolled through the book series’ fan pages and forums to understand people’s expectations from her character.

“I spent a lot of time lurking on online book forums to see what fans thought. I realized that [Penelope] is this really beloved character, because she’s not this perfect girl that all the boys love. She’s a complete wallflower,” Coughlan said. “So I thought, ‘OK, I really, really wanna do that justice,'” she added.