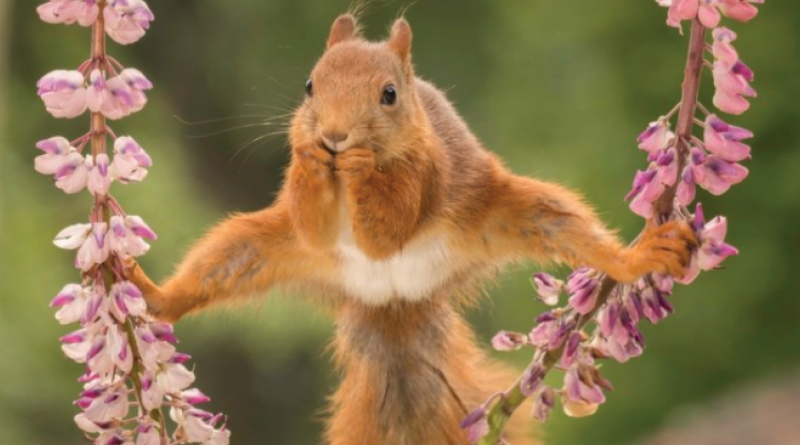 When you are having a bad day, funny animal photos will surely change your mood. We picked the funny images we could find online with animals so cute

you can eat them. Keep scrolling for the 20+ most hilarious photos of animals taken at the right time.

This bear is more curious than the majority; this bear wants to gain photography skills. Maybe he was curious about how the world can be seen from the cam. If he was impressed or not, we will never know.

What can be more beautiful than two of the most feared hunters in the jungle, making funny faces together? Nothing, we told you.

This photo is one of those you expect to see when a car pulls too close to your squirrel, and she’s scared to death.

This panda bear is funnier than most of the kids nowadays. Who can take pride in such a pose in the snow?

Hey, can you take a photo right now?

What a curious little monkey. If people do it all the time, why shouldn’t I do it too?

When you are so amused that rolling on the floor won’t make you stop laughing. It will make even others laugh at your laugh.

This seal on the left has the most disgusting face you could ever see. A rare combination of awe and shock you can’t miss. The other seal is just indifferent.

This little squirrel is so lovely trying to split her legs so wide. It seems that yoga poses aren’t only for humans.

Don’t wake me up

A lion comes home to his queen to wake her up, and she doesn’t really like that. Ohh, I was sleeping so well. Don’t wake me up, please!

The black sheep of the group

When everyone is normal, one person has to get out of the landscape and be weird as it can be. We all have that friend. But isn’t he cute in this photo?

We all have these types of days when our hair looks crazier than usual. Thank God it only happens once a month or so.

Yeah, Mama is back from parents teachers meeting at school and it returns out they have all been naughty as school so mama is trying to figure out the punishment they are going to get.

I am a warrior!

Like this little lizard, you should be a warrior. Fight until one of you is dead! As you can see, this lizard is ready for anyone who can challenge her.

Have you ever seen a fox disappear in a foxhole? Prepare to widen your eyes because this is something you will rarely see!

Wow, these ants know how to offer a pose for a photo. Aren’t they cute? Who said insects aren’t sexy? This is something to remember.

Ohh, they saw me!

Time to rock out

This bear still thinks he’s in the shower. His dancing style is so merry it makes you want to dance with him too. No matter what style of music he likes, nature sounds will always rock! Let’s do the macarena y’all!

No peeking for you!

Surprises make us love our life, yet some of us can’t control their curiosity and try to cheat before the exact moment. When someone tells you not to look, you will want to view it. But that’s not your fault! It’s in our nature!

You know those times when you wanted so badly to do yoga, but your kids prevented you from it? Well, look at this monkey who is doing it right now. It looks pretty nice, right?

Girls are girls, no matter the species. Look at these cute zebras trying to fit in the same car mirror to take that selfie they wanted to do.

These sweet little sea birds feed on fishes, insects, smaller animals that live in aquatic habitats. Don’t tell me you never thought they would look great in a wall photo?

A second it’s all it takes to make a great photo. Look at this zebra’s tooth: aren’t they funny as hell? I wonder what she wanted to scream at us.

Look who decided to ruin the group photo? This seal thinks she’s funny… Maybe it is?

Look at this arrogant ostrich face. He looks like he was born to be photographed.

Chow down your birthday cake?

This gorilla eats a birthday cake like he never saw one at the Berlin Zoo. I guess hungry humans and hungry gorillas aren’t that different.

Just look at these little hamsters making a romantic gesture. Aren’t they cute?

Well, we love the tutu, but we’re not sure if it fits in the back of a rhino. The peacock will fit anywhere. Maybe the bird will clear this out for us.

Whoever said polar bears aren’t the cutest animals on the Earth? Well, he was wrong. Look at this photo!

When you don’t have Photoshop, nature steps in to help. I mean, look at this bird!

What to do when your mouth is much bigger than the pray? Change the aim, and you will get the fish.

Love is in the air

Look at these flamingos creating a heart.

Here’s an animal sign. Isn’t he cute? He cares about the people driving by and helps them have a better understanding of the sign.

When your winter is six months long, you can always relax by doing some yoga-like this bear here. He’s so white; you wouldn’t distinguish him from the fresh snow.

When you don’t want pictures taken, just dive your head in the snow, ok? Precisely like this shy bear who shoved his head deep in the snow when someone tried to make him a photo.

Animals are exactly like us. In groups, they behave similarly to us, so they have their bullies too. “Look buddy, you may be bigger than us but you’re on our side of the beach so beat it!”

Too tall for this plane

Giraffes are usually the tallest animals in the jungle, but this plane crew was a little scared of its height.

Have you ever seen something weirder than this? Two rhinos in one or what? Nature can tell so many funny jokes sometimes.

Look at these guys kissing. They are cute as they can be. Animals enjoy kissing too.

You already know that everyone knows a donkey from the way they bray. This one is using all his voice.

The third wheel on a bike

Not only humans act like this. Even owls hate when the couple kisses in front of them. It seems that PDAs – public displays of affection is uncomfortable for all animals.

Even bears have a sensitive side. I mean, don’t you just love him?

When you got a best friend as tall as an elephant, you can ask him to help you cross the river. Look at these two funny animals and remember alliances are all over the world.

This is one pair of eyes that can make you feel haunted. This owl looks creepy enough.

Here’s the best place to make a stingray friend. He comes close to say, Hi. The rest is up to you.

If you look closely in this photo, there are two elephants there: one is real, and one is in the water. Got it?

Every penguin is ready for fun.

Who said you could feed the giraffe? Well, she is going to eat your hand if you’re not careful.

Who said dogs are not well trained? Here’s one that is.

This dog is so happy to have won the contest. His goofy face makes all the trick.

When your dog tries on your tooth, the results are either creepy or hilarious.

This little dog is not happy at all with his gaze.

That moment when you are trying to hide something from your friends, but your dog sneaks it from you.

When you don’t know how to go in style, look at this photo, and get inspired.

Well, this weird dog breed is called Komondor, and this is how it usually looks. You have to give him daily grooming to look like this.

When you got a friend that’s willing to look inside your ass to check the situation, then you have a best friend.

This is the cutest photo of a little girl and a male beluga whale you ever saw. Just look at their faces.

Just look at this little boy fishing with his cat. They make the best fishing team ever!

When you need a little water to cool yourself, this is the best place.

You don’t see stuff like this in other cities. How can a dinosaur have a pet? Well, it can go on the NYC streets.

Just look at them.

How cute is this little boy offering a small kiss to his llama?